Soon, the latest study results will be presented here.

Here, some of the results of the preliminary study are presented. These include socio-demographic data on the participants, statistical analyses and interpretations. Among other things, the preliminary study was used to gain a first impression of the population’s preferences regarding measures and consequences of the corona pandemic and to adapt and further develop the questionnaire accordingly.

N= 260 respondents took part in the survey of the preliminary study. Inclusion criteria for participation were a minimum age of 18 years and good to very good German language skills. This is not a representative sample. The majority of participants are students who were easier and faster to recruit for this study (convenience sample). 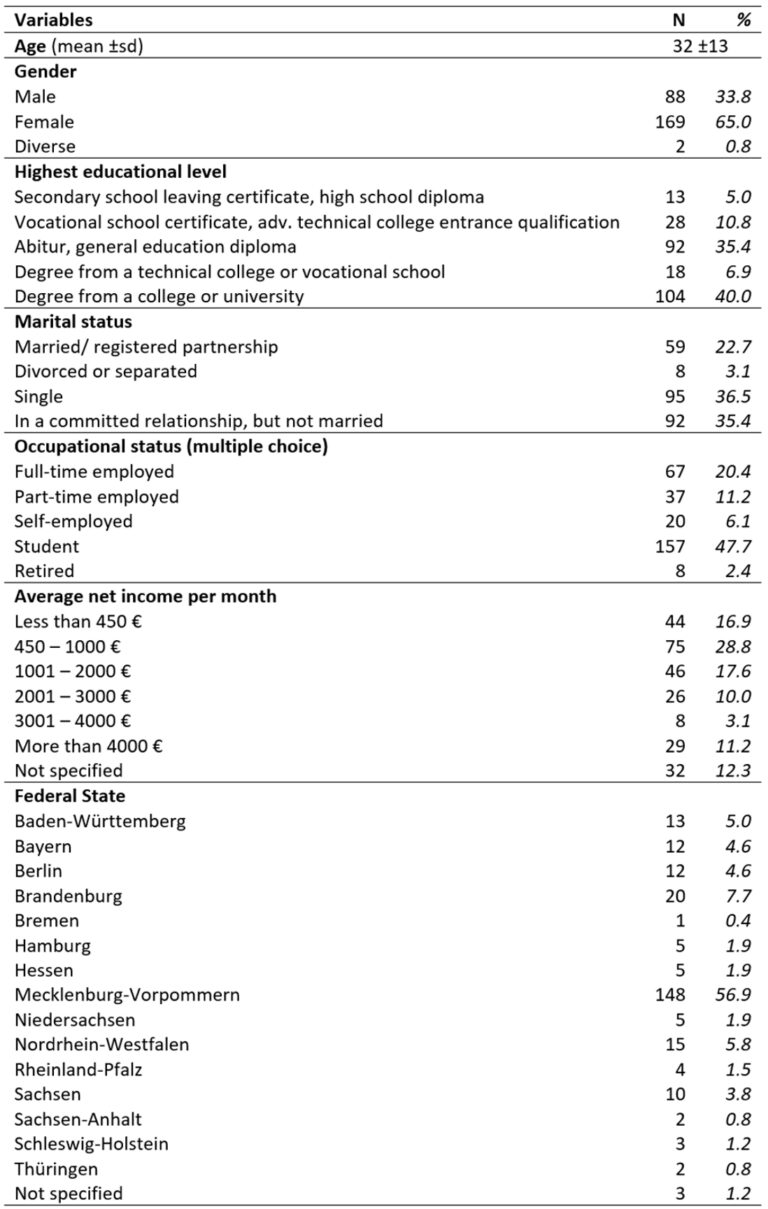 SD= standard deviation
Note: Due to missing data, the sum of the percentages in individual categories does not add up to 100.
Table 1: Socio-demographic data

The preference data were estimated by means of logistic regression (conditional logit model). Figure 1 shows coefficients for each level of a property (attribute) in the 95% confidence interval. The coefficients represent the relative importance for each level within an attribute. A positive coefficient means a positive preference for that level. The larger the coefficient, the greater the preference for that level within an attribute. Conversely, a negative coefficient indicates a negative preference for that level. Positive coefficients indicate an increased influence on the choice decision, negative coefficients a reduced influence on the choice decision. The vertical distances (or differences) between the levels within an attribute indicate the preference weight for a change from one level to another. If two considered levels are close together, the change from one level to the other is of little importance. If the levels are far apart, the change is of great importance. For example, for the attribute exit restrictions, the first two levels (1 month state border and 1 month states and state borders) are approximately at the same level. There is no measurable significant distance between the two levels. However, the distance to the third level 1 month curfew is clearly visible. This means that the participants accept a 1-month closing of the state border and a 1-month closing of the federal states and state borders to the same extent. A 1-month strict curfew, however, is rejected. The difference between the first and last level of an attribute shows the importance of this attribute compared to the other attributes. For example, the level difference for the attribute individual risk of infection (1.7 units) is greater than the level difference for the attribute decline of GDP (1.1 units). Thus, for the participants, the risk of infection was more important in their choice than the decline of GDP. 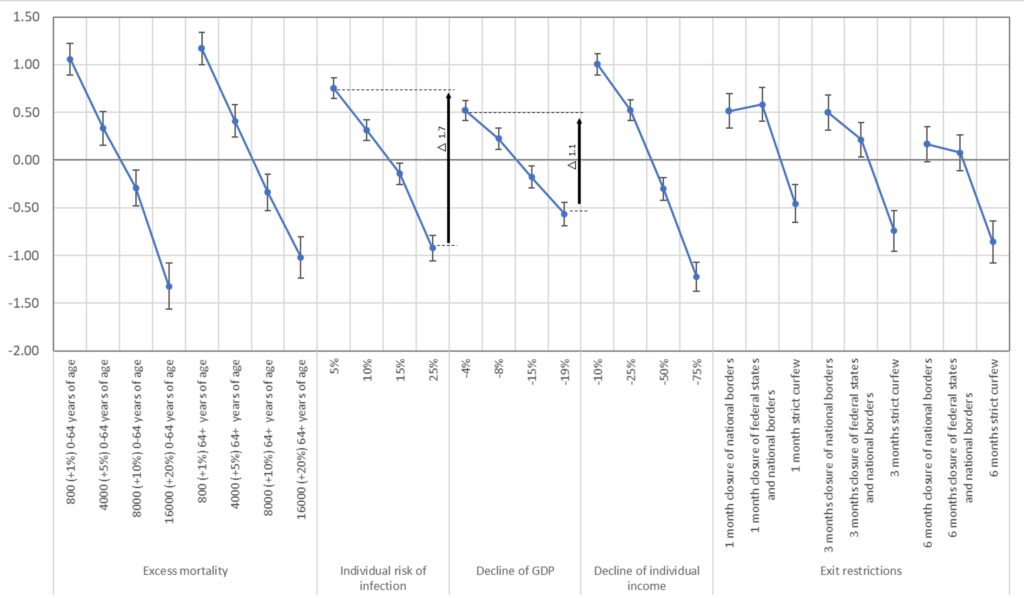 Figure 1: Coefficients of the most important attributes in the regression model in the 95% confidence interval (extract)

The level coefficients of the remaining attributes contact restrictions, closure of facilities and personal data are close to zero with some overlapping standard errors. Therefore only a trend can be reported here. As an example, the level coefficients of the attribute facility closure are shown in Figure 2. The coefficients for the closure of 1 – 3 months have a positive sign with slightly decreasing preference. This can be interpreted in such a way that a closure of up to 3 months during a pandemic seems acceptable. But the longer the closures last, the lower the preference. A threshold value for the acceptance of closures seems to be between 3 and 4 months. From 4 months on, the signs of the coefficients are negative, indicating a negative preference.

Figure 2: Level coefficients of the attribute Closure of facilities

Figure 2: Relative importance of all attributes

The pandemic affects the entire population. It can be assumed that there are a large number of groups in the population with different preferences regarding coping with and accepting the consequences of a pandemic. The groups (or classes) may be a cluster of people with different experiences, preferences, characteristics, behavioral patterns or even political attitudes. With the help of latent class analysis, the respondents were divided into different classes according to their choices. Two classes with different preferences could be identified. The following figure 4 compares the relative importance of the attributes for the two classes. In the case of class 1, excess mortality had the greatest impact on the choice decisions. In contrast, the risk of infection was the most important decision criterion for the participants assigned to class 2. Common to both classes is that the decline of individual income had the second largest impact on the choice decisions. 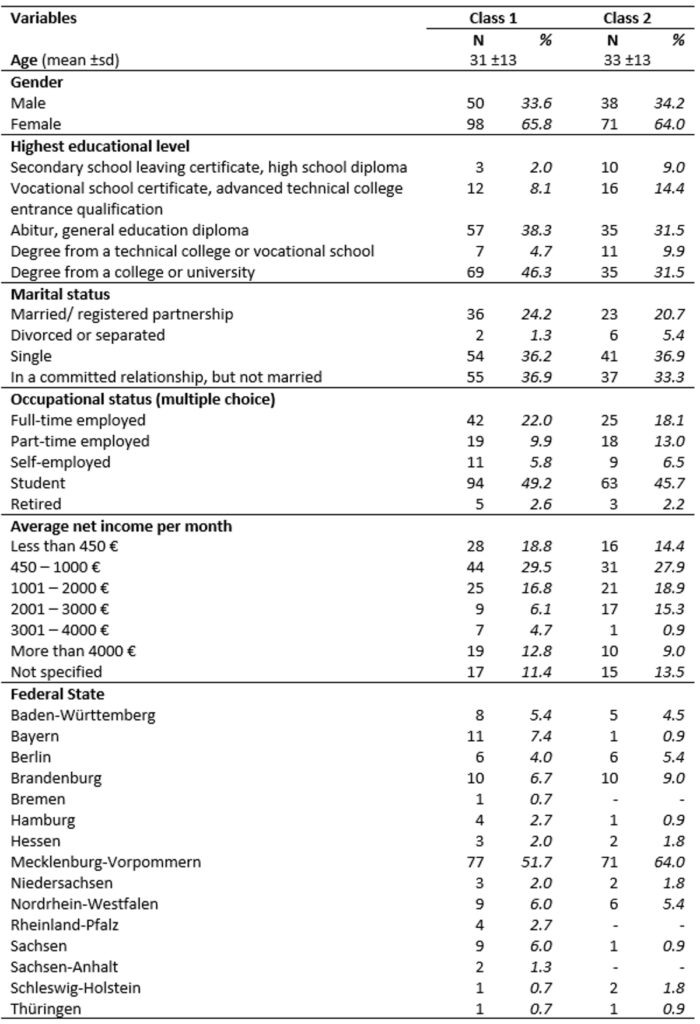 Table 2: Sociodemographic data of the classes

In the survey, participants were also asked to assess and evaluate measures and key figures of the coronavirus pandemic. Below is a comparative overview of the different views of the participants of both classes.

Overall, excess mortality is more important than the individual risk of infection. It can therefore be concluded that the health of the general public or the prevention of general mortality is given higher priority among study participants than their own individual risk of infection. This corresponds to the assumption that during the pandemic most people remained at home in self-imposed quarantine to protect not primarily themselves but others, e.g. people with pre-existing conditions and other risk groups. Individual responsibility for the health of others is more important than the risk of infection. In contrast, the focus is on reducing individual income rather than preventing a decline in the country’s overall economic performance (GDP). Data protection, contact restrictions and the closure of facilities take a back seat to expected economic and health losses. However, a strict curfew is more likely to be rejected than the closure of state borders or the closure of federal states and national borders.

The results of the study could help decision-makers in government and the health care system to make difficult decisions about the measures to be taken and the consequences of a pandemic in the interest of the population and also of population groups.

When analyzing and interpreting the results, it should be noted that the total number of study participants is not a sample representative of the population.